Gather a group of your best trackers and fighters to venture into the Blasted Lands. Lord Kazzak resides deep in the Tainted Scar and patrols the area, ready to smite all who dare cross his path. Prepare yourselves for a fast and furious battle against time and watch out for his Shadow Bolt Volley, which causes massive amounts of raid-wide damage.


Location: Tainted Scar—Blasted Lands
Suggested Level: 60
Players Suggested: 40
Associated Quests: Priest—While players have a small chance to get the Eye of Shadow as a random drop from elite demons in the world, Lord Kazzak is guaranteed to drop it. Following the quest, The Balance of Light and Shadow to its completion will reward the weapons Benediction or Anathema. Learn more about this iconic weapon in Wowhead’s guide.

A member of the Blue Dragonflight, Azuregos makes his home in Azshara, guarding the magical artifacts left behind there. You’ll want to gather a group of comrades-at-arms to withstand his frosty reception and lay claim to the items he protects. To the victors go the spoils, and for some Hunters this means laying claim to the Ancient Sinew Wrapped Lamina. This item has a low chance to drop on elite blue dragons, but is a guaranteed item drop from Azuregos.

The PvP Honor system has arrived in WoW Classic, opening the way for players to climb the ranks and earn PvP rewards.

Facing enemies who are within 10 levels of your own character and defeating them will earn you Honorable Kills. These Honorable Kills will help you advance in the PvP system and unlock access to a variety of rewards, such as a PvP trinket, cloak, potions, and more.


Not all Honorable Kills are valued the same, however. Killing the same enemy multiple times will result in a decreasing amount of Honor gained until they aren’t worth anything more through the end of the day, when the system resets the diminishing returns.


Diminishing Returns from repeated kills on a single target are as follows:


Honorable Kill values are also weighted by the defeated player’s own rank and level. You’ll earn more Contribution Points by defeating players who have more PvP experience under their belt and have reached a higher rank than by defeating players who are new to the battlefield. Each week your rank will be updated based on your activity relative to the other members of your faction, but climbing to the top won’t be easy—it will take regular participation to maintain or increase your rank.


You can also gain a large number of Honor by killing city faction leaders in Darnassus, Ironforge, Orgrimmar, Stormwind, Thunder Bluff, and the Undercity. Once Battlegrounds are available in WoW Classic, these will also provide Honor.

You will be given Dishonorable Kills for killing civilian NPCs which immediately impacts your Honor rating. Every dishonorable kill costs you some of the honor that you’ve earned in previous weeks, making it difficult to reach the higher ranks as long as you have any dishonorable kills counted on your record at all. These will appear in the Honor tab immediately. 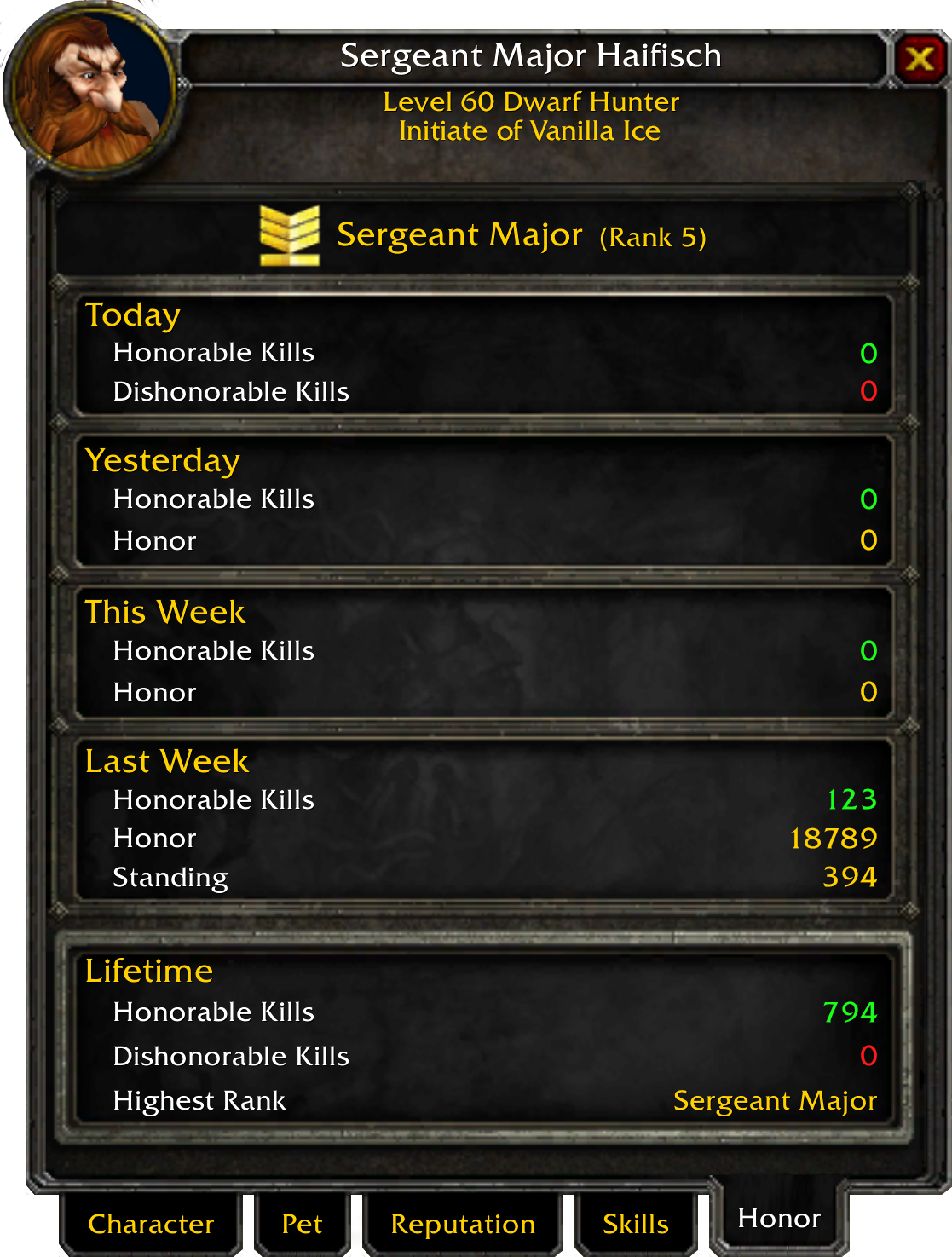 You can check your status in the character information window (C) in the Honor tab. This shows your current rank as well as your honorable kills for the current day, the previous day, the week, the previous week, and over your character’s lifetime.


There are 14 ranks, and each rank provides access to new rewards. You’ll need to head over to the Officer’s Barracks in Stormwind or Orgrimmar to purchase your new items.